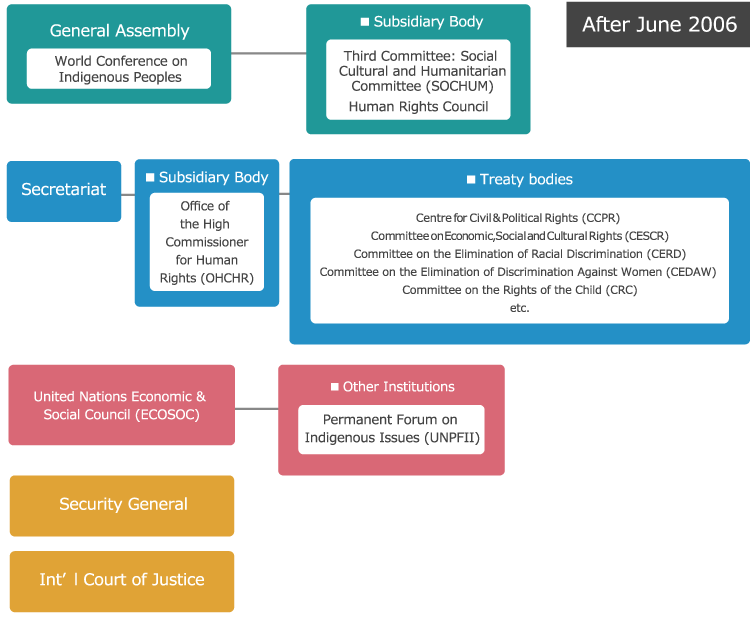 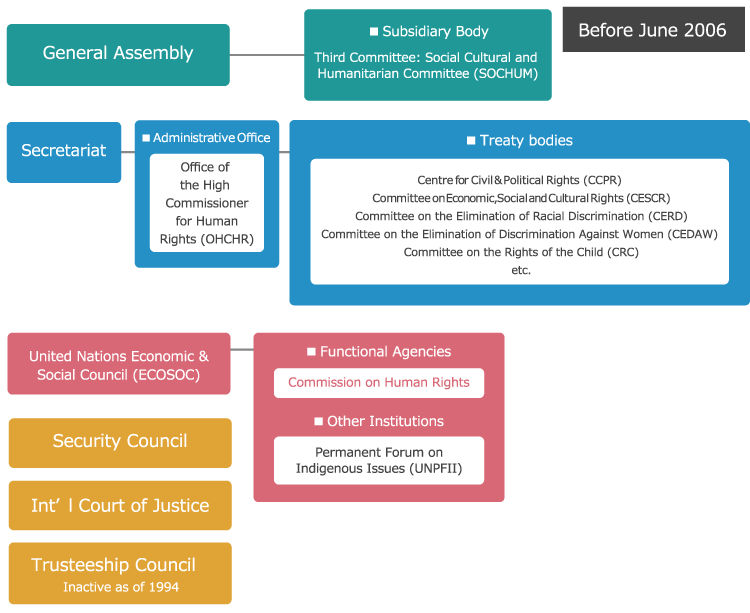 Active as from 1946 to 2006
Established as Functional Commission to adhere to the function of the Economic and Social Council (ECOSOC) of making “recommendations for the purpose of promoting respect for, and for observance of human rights and fundamental freedoms for all.” (UN Charter Article 62)

Sub-Commission on the Promotion and Protection of Human Rights
Active as from 1947 to 2006.
This Sub-Commission had the following powers and functions
(a) Undertake studies on human rights issues and make recommendations to the Commission concerning the prevention of discrimination of any kind relating to human rights and fundamental freedoms and the protection of racial, national, religious and linguistic minorities
(b) Carry out any other functions entrusted to it by the Council (ECOSOC) or the Commission (UNCHR)

Treaty Bodies
Treaty Bodies are committees of independent experts appointed by the General Assembly to monitor the implementation, by State parties, of the core international human rights treaties.
Under the Reporting Procedures, State parties are obligated to submit reports which serve as the basis for the committee’s concluding observations to be published. At the time of examination, the treaty bodies may receive information on a country’s human rights situation from other sources, including NGOs and the people concerned. Afterwards, the committees present their concerns and recommendations.

Human Rights Council
Active as of June 2006. HRC is one of Subsidiary Bodies of General Assembly. Commission on Human Rights, which used to be a functional commission of the Economic and Social Council was reorganized into this council. The Council is made of 47 Member States, which are elected by the majority of members of the General Assembly, responsible for the promotion and protection of all human rights around the globe. The office is located in Geneva, Switzerland.

Universal Periodic Review – a review of the human rights records of all 193 UN Member States every 4 years (second cycle is every 4 and half years).
Special Rapporteurs and Working Groups – independent human rights experts with mandates to report to HRC and the General Assembly.

Expert Mechanism on the Rights of Indigenous Peoples
The Expert Mechanism provides thematic advice, in the form of studies and research, on the rights of Indigenous peoples as a subsidiary body of the Human Rights Council. The Expert Mechanism supports legislative proceedings initiative.
Permanent Forum on Indigenous Issues
Active as of 2000. The Permanent Forum is an advisory body to the Economic and Social Council, held in New York, U.S.A. The Forum has 18 members, eight nominated by the governments and eight directly nominated by indigenous organizations. They discuss matters relating to the concerns on economic social development, culture, education, health, human rights etc. and rights of the world's indigenous peoples. Represents from our association have participated in this since 2003.